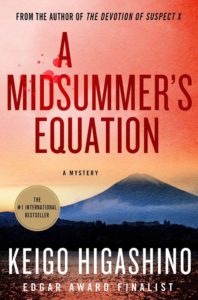 From the author behind the worldwide sensation, The Devotion of Suspect X comes another action-packed murder mystery. The third instalment in the Detective Galileo series, “A Midsummer’s Equation” has been translated from Japanese by Alexander O. Smith, the translator of most of Higashino’s works.

This book reintroduces Dr. Yukawa, a physicist who moonlights as an off-the-record detective of the Tokyo Police Department, thus earning the moniker “Detective Galileo”. Hari Cove, formerly a popular tourist spot, has a rich seabed that an undersea exploration company wants to mine for minerals. The citizens of the scenic seaside town are torn –  while some argue that this would destroy the picturesque town, others believe that it is the only way to revive the dead, now unpopular, destination. Yukawa, representing the mining company, is in town speaking at conferences to convince the environmentalists that this operation will not destroy undersea life.

At least, that was the original purpose of his visit, until one of the guests staying in the same hotel as him was found dead by the ocean. The local police are quick to write it off as a suicide and close the case but when they discover that the body belongs to a former police officer, the Tokyo Police Department gets involved. The circumstances of his death don’t add up to the person his colleagues knew him to be and, much to the chagrin of the local police, Tokyo orders an autopsy, suggesting the likelihood of murder – something that Yukawa’s sharp mind grasped the minute he saw the crime scene. Yukawa unwittingly finds himself in the middle of the investigation and is yet again asked to lend his services to the police in unravelling the mystery.

Higashino’s novels are usually unputdownable but this one lacks concision and pace. There were a couple of elements which were given unnecessary focus – the relationship between Yukawa and a young boy he befriends at the hotel in which he’s staying, and the detailed scientific arguments over the preservation of the ocean. I won’t reveal whether they are relevant to the plot or not, but they slow the book down considerably. Two different police departments being involved also made keeping track of the officers’ names difficult.

But the meandering narrative is more than compensated for – filled with unpredictable twists, following Yukawa as he peels away the layers behind the man’s death will keep you on the edge of your seat. “A Midsummer’s Equation” is less intricate than Higashino’s previous novels but no less compelling.