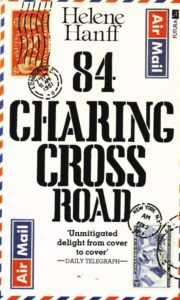 84, Charing Cross Road is a compilation of letters between author Helene Hanff and Frank Doel, a bookseller at 84, Charing Cross Road, London.  Hanff, a resident of New York City and a voracious reader constantly in search of rare classics to add to her collection, first wrote to Doel in 1949 to enquire about books she had long wanted which were either unavailable or unaffordable in New York. Doel responded, agreeing to send the books across from his store in London. One book wish-list led to another and this sparked off an unlikely friendship between two remarkable people that later expanded to include the staff at 84, Charing Cross, Doel’s family and even a neighbour of the Doels’.

Hanff and her new foreign friends discussed a variety of topics in between Hanff’s book requests which Doel did his level best to fulfil, sometimes going to great lengths to unearth specific editions. The early letters from Doel to Hanff were very prim and proper but Hanff, with her charm and outrageous wit, managed to chip away at his stiff-upper-lip exterior and eventually form the most precious of friendships. Post-war Britain saw acute food shortages and Hanff generously couriered food and Christmas gifts to the Doels and the staff, bringing them great joy.

Hanff was writing play scripts during the time of these correspondences and kept putting off visiting her pen-pals because of financial difficulties – she referred to herself as a “poor writer with an antiquarian taste in books”. Unfortunately, she put it off too long – Doel died suddenly and the bookshop eventually closed. Many years later, Hanff did finally go to London and meet Doel’s family, the events of which are described in Hanff’s book The Duchess of Bloomsbury Street. Sadly, sacrilegiously, 84, Charing Cross Road is a McDonald’s joint today.

This tribute to friendship and humanity is priceless. It’ll make you laugh out loud, it’ll make you choke up towards the end, but most of all it’ll leave you half wishing we still lived in those times, quaint yet meaningful.

A delightfully heartwarming memoir, this book is powerful and emotional and will be especially cherished by those who love books and bookstores. Hanff and Doel represent a breed that is fast disappearing into oblivion – there are few people left today who love books the way Hanff did, and the Frank Doels of the world are all but extinct.

Definitely five out of five stars, because it is impossible not to love.