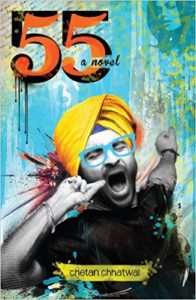 “Arjun Singh is a typical South Delhi brat whose biggest worry is securing a much coveted seat in one of the city’s top colleges. But his ambitious plans come to a screeching halt when he scores a paltry `55’ in English in the board exams. Unable to meet the cut-off, Arjun is forced to take admission in a neighbouring second-grade college. Between grappling with his identity as a Sikh and facing repeated misfortunes in love, Arjun’s only solace is his three best friends from school who have also ended up in the same dump. What will happen to his future now?”

“55”, written by Chetan Chhatwal, is a story about Arjun Singh, a rich spoilt Sikh brat who goes through various transitions in his life while trying to come to terms with problems that he has to face. His main quirk is that he is very insecure about his long hair and the turban and believes that everything is going wrong with him because of the turban. However, being a bit religious and not wanting to hurt his family sentiments, he tries to live with it and not cut his hair. With his plans of joining St. Sebastian to study for an Economics degree shattered, as he gets only 55 in his English paper, he joins the SAC and spends 3 years not going to college, trying to woo Radha, the love of his life, and generally trying to have as much fun as possible with his 3 best friends. What transpires in the end makes for an interesting read.

To be honest, the start of the book was not really great as there is a long and tedious description of what the protagonist does as soon as he gets up, including an unnecessary description of his time on the potty. In fact, the entire book is interspersed with an unnecessary amount of shit related jokes. Apart from this, one could feel that the author was trying too hard, especially in the initial stages, to sound humorous. Alas, it does not come across well. Also, while trying to build the bad boy image of the protagonist, the author sometimes goes too far (with insults) to try and makes you feel that there is an overdose.

However, as the book goes on and there is some semblance of a story developing, you will find yourself interested in how Arjun Singh would eventually fare and his encounters with love interest Radha are particularly worthy of interest. In spite of the crass humour in the beginning, there are many instances in the book that would make you laugh out loud, but the author does miss out on creating circumstantial comedy and instead relies on crude jokes. The story, while going nowhere is a commentary of the 3 years spent by Arjun Singh getting a degree and the end is abrupt, too, which leads one to believe that there could be a sequel in the works.

While not an excellent book, it is still a very good attempt by the author and one that you would definitely enjoy while travelling.