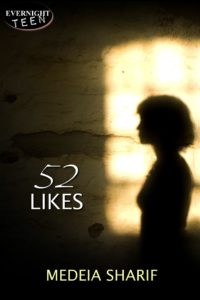 52 Likes by Evernight Teen Publishers is a delightful read. The story is of a young school going girl Valerie who undergoes a brutal rape and a near-murder at the hands of a stranger one night, when she was on her way to one of those school parties which are organized in abandoned houses. While maneuvering her way through the street which was supposed to host the party, she got into the wrong house and became victim of a brutal rapist murderer.

Now, after a week the spring break is over and Valerie is back to school trying with all the courage she can muster to recover from the incident and be once normal again. But fate is still not in her favour for she soon discovers that rumours are abound about her being involved in a nasty consensual group sex which went the wrong way and ultimately to control things police had to be involved. As if this was not enough, Valerie soon finds out that she is being haunted by the ghosts of two young girls on social media and the weird fact is that all their photos have exact 52 likes on them.

So what is the mystery? Will Valerie get her life back? Is her rapist anybody whom she knows? Will he try to finish off Valerie too like those two girls? What does the two ghosts want from her? To know this and much more read this exciting new book today and find out yourself about Valerie and her life.

The plot of 52 Likes is quite interesting and so are the characters. The book is difficult to put down and is engaging right till the end. Social media and ghosts appear like a rather unlikely and unbelievable combo but the author has done a decent job of combining the two to weave a story quite unique and exciting. The book is neither too scary nor too light and thus comes across as an apt read for young adults. The end is a little predictable but slow though it doesn’t spoil the reading pleasure much.

The courage which Valerie shows amidst all that misfortune was quite impressive and inspiring. She is at the best an inspiration for all young girls to keep going forward no matter what and never succumb to pressure and hardships. I enjoyed this book and will rate it three and a half out of five stars. I will also recommend 52 Likes to all young adult readers.