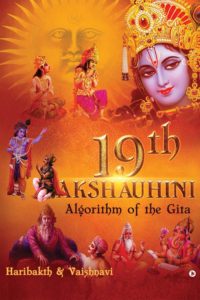 The book is an attempt to peep into the infinite knowledge that Bhagwat Gita has to offer. Bhagwat Gita or simply Gita is a collection of 700 Sanskrit verses based on the Hindu epic of Mahabharata. It is a narrative framework of a dialogue between Lord Krishna and Arjun during the battle of Kurukshetra.

The book “19th Akshauhini” attempts to deal with the dilemmas of our modern generation from Gita’s perspective with an open mind. It devises a unique and a pretty intimidating analogy for understanding Gita. It uses various modern means of co-relation to make the book an easy read and easy to comprehend even for the non-believers. The author himself states at the start of the book that it is not meant for people without faith in Hinduism, as he proclaims that Krishna is the Lord and Gita being his teaching can never be biased or wrong.

“19th Akshauhini”, at many places, tries to perpetuate the idea of Krishna’s supreme power. It explains how even though from a common man’s perspective Krishna can be wrong, but him being the Lord he can never make a mistake. It is we who fail to see his grand design, it is we who fail to predict his unconventional ways to remove Adharma from our world and purify it. The book explains this point with a few examples like the one where Krishna even though promising not to pick up weapons in the Mahabharata, uses his chakra. Also even though Krishna denounces violence, Barbarika’s head which had watched the whole battle says that Krishna killed everyone in the Kurukshetra war and all others were just instruments in his master plan.

The writer Ravindra Rao (pen name Haribakht) tries to deals with these issues of explaining the chaos in our lives and the solutions to it, using Gita as a conduit for it. I must say that he has done an astonishing job, the level of precision and perfect use of jargons make the book a must-read. The book has been well composed into a set of chapters, where each chapter deals with a certain set of questions to which Gita holds the key. To add a cherry to the top co-author Vaishnavi has done a wonderful job with her graphical representations of the various points.

“19th Akshauhini” is a book which should be read by all who look forward to getting a new perspective on our holy book. The book throws an entirely new perspective on the teachings of our religion. It is pretty evident that to the author Gita is not just a book; it is a set of moral instructions on how to lead one’s life but it is the penultimate voice of God. It is the author’s passion towards his work which makes great writers stand out amongst a crowd, and I am sure that this is the case with the book in hand. It’s a work into which a herculean amount of effort has been put, and a work such as this, even though it might not appeal to everyone, can be a good read for all.

Final Verdict – A must read if someone wants to gain an insight into teachings of our religion and for someone who wants to understand the pillars on which Hinduism is based.