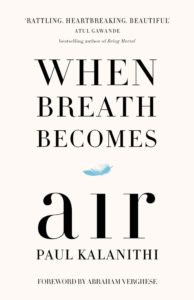 “When Breath Becomes Air”, a posthumously published memoir is divided into two halves – the first half chronicles Paul Kalanithi’s early life and his life-altering career switch from English to medicine. His motives for doing so are deeply philosophical – to solve metaphysical riddles and understand what makes life meaningful. Although literature escorted him halfway to the answers he sought after, he realises that to really enlighten himself he would need to place himself at the intersection of biology, morality, literature, and philosophy.He believes that while literature educated him about the soul, medicine would teach him about the body, and thereby help him develop a holistic understanding of life.

He believes that while literature educated him about the soul, medicine would teach him about the body, and thereby help him develop a holistic understanding of life.

Paul is on the cusp of completing his residency in neurosurgery and embarking on a career bursting with potential when he is diagnosed with stage IV lung cancer – in a cruel twist of fate, his desire to learn about mortality brought death to his doorstep. Thus begins the second half of the book. As a doctor, he knows what his chances of survival are and does not waste time harbouring false hopes. He instead resolves to make the most of the limited time he has left. Rather than drowning himself in misery, he becomes more dogged and focused. Aided by a cocktail of drugs, Paul goes back to the operating theatre. While his life is ebbing away, he puts renewed vigour into saving those of his patients. He is in excruciating pain, his stamina sapped by chemotherapy, unable to eat, often struggling to breathe, but he does not relieve himself of the moral responsibility to his profession until the patient in him inevitably overpowers the doctor.

As his body began to cave in, his mind remained steadfast and determined – in the words of his wife, he was frail but never weak. Confined to his wheelchair, he commenced the writing of this book. Death caught up with him before he could complete it, and his wife Lucy recounts his last days in a heartbreaking epilogue.

Such unwavering courage is dumbfounding, a testament to the remarkable man that Dr. Paul Kalanithi was. He is the embodiment of everything that a doctor should be. The world needs people, and doctors, like Paul. Paul’s prose is exquisite. Imagine the mental fortitude he must have possessed to inject humour and objectivity into the narration of his own decline. The book is beautifully written and every sentence will resonate strongly, even more so if you have lost a loved one to a deadly disease.

“When Breath Becomes Air” is a devastating memoir of an extraordinary man whose life ended much too early. Paul’s life, rife with promise, was tragically snatched away but, as morbid as this thought might be, the imminence of his death is what culminated in this beautiful work of philosophy. In one fell swoop, this book raises the yardstick that doctors will be measured against and reminds us that our existences are but transitory. This man who looked death squarely in the eye and went fearlessly emphasises that it’s not how long we live that matters, but how.