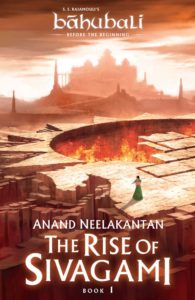 Anand Neelakantan’s “The Rise of Sivagami” (Book 1) is a prequel to the epic Indian movie “Bahubali: The Beginning”. The film’s director S.S. Rajamouli, after reading “Asura: The Tale of the Vanquished“, decided that Anand would be the perfect choice to hunt for stories in Mahishmathi’s past. In Rajamouli’s own words – “The stories of Mahishmathi could not be contained within the two-and-a-half hours of a film, even with two parts. There were characters lurking in the shadows waiting for their stories to be told. We knew if we went back further in time, a series of interesting stories would emerge.” After their meeting, Anand shelved his fourth book, Devayani, and began working on the Bahubali trilogy. He finished the entire book in 109 days.

“I may have brought Sivagami to life on screen but in The Rise of Sivagami, Anand Neelakantan has given her wings.” – S.S. Rajamouli

The opening scene of the movie “Bahubali: The Beginning”, shows a woman running carrying a child and blood-thirsty soldiers in their pursuit. She dies protecting the child. That woman is Sivagami, the Rajamata of Mahishmathi. This is her story.

When Sivagami was just five-years-old, her father, Devaraya, a noble lord in the kingdom of Mahsihmathi, was branded a traitor and executed. When the soldiers had come to take him away, he was reading an old manuscript written in the forgotten Paisachi language. Shivagami makes it her destiny to find the book, unravel its secrets and destroy the evil kingdom of Mahishmathi which killed her beloved father. But as fate would have it, she is left to live in an orphanage under the watchful eyes of its caretaker – Revamma, who hates Sivagami’s guts. Can Sivagami discover her father’s book? What secrets does the book hold? How can a lonely orphan girl bring down the mighty Mashishmathi Empire?

“The Rise of Sivagami” also has a parallel story of Kattappa, prince Bijjaladeva’s slave who is tormented by his own inner demons. He is caught between his duties towards his prince, and his love for his brother Shivappa, because of which he lives in perpetual internal conflict. Will Kattappa do what is morally right? Or will he unfailingly perform his duties regardless of the consequences?

“The Rise of Sivagami”, like all of Anand Neelakantan’s novels, is a rich mix of diverse characters. He has developed forty new characters for this book – Pattaraya – the cunning bhoomipathi, Jeemotha – the fearsome pirate, Keki – the sharp tongued eunuch, Skandadasa – the honest to a fault Upapradhana, Vaithalikas – the rebel tribe – to name a few. All of these characters have a major impact on the storyline.

Being the first book of the trilogy, “The Rise of Sivagami” does well to develop the various subplots which I’m sure will seamlessly add up to the climax in the final book. The two central themes – the Paisachi Manuscript and the Gaurikanta stones – will undeniably keep the readers guessing till the conclusion of this grand tale.

Anand Neelakantan’s narratives of rich mythical worlds need no introduction. But he has outdone his previous books in his depiction of Mahishmathi. He makes the landscapes and architectures come alive.

The Bahubali trilogy will surely be a benchmark in Indian storytelling and you should definitely grab this first book of the trilogy – “The Rise of Sivagami”.