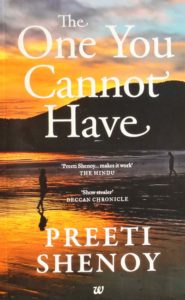 With most of her books ending up on the bestselling charts, Preeti Shenoy has become a household name now and thus I should be rather embarrassed to state that “The One You Cannot Have” is, in fact, my first Preeti Shenoy book. So with really high hopes, I set down to read this one. Needless to state, I was not disappointed for she sure knows her job well and the book is indeed impressive. A simple story with little twists and a couple of interesting sub plots together make the book a good read for the perfect Sunday evening.

Preeti Shenoy’s “The One You Cannot Have” revolves around four major characters – Aman, Shruti, Anjali and Rishabh. Aman and Shruti were college sweethearts and going by what they had between them, they were inseparable. Once destined to be married, Aman receives a shock when Shruti breaks up with him stating her mother’s terminal illness as the reason behind her decision. A forlorn and love torn Aman tries hard to win her back but to no avail, so he decides to move to London as a way to move past Shruti. Now after almost two years Aman is heading back to India and he is still not over his first love.

Meanwhile, Shruti who left Aman has been married to Rishabh for two years but never once in her marriage she has felt the kind of connection which she had shared with Aman. For Shruti, it is Aman whom she can never forget. Anjali is a peppy independent girl who finds Aman charming and finds herself increasingly drawn towards him. Aman knows how Anjali feels but being unsure of his own feelings, he doesn’t reciprocate.

So Aman and Shruti both have somebody but yet crave for another. Will they get what they want or will they too have “The One You Cannot Have”? Know this and much more in this exciting tale of love and joy, separation and desperation, hope and despair.

I found “The One You Cannot Have” quite entertaining and interesting. It has an excellent plot and some really charming characters. Anjali and Aman were my personal favourites though Rishabh and Shruti were likeable too. I liked the steady pace at which the story moves. The build up to the end was also amusing; it made the end all the more fascinating. The climax was good and different. The book picturizes the difficult part of love and that is what makes it different from other contemporary romances. Combined with Preeti’ s excellent writing skills the story makes for a decent read and I rate “The One You Cannot Have” three and a half out of five stars while recommending it to all my readers.