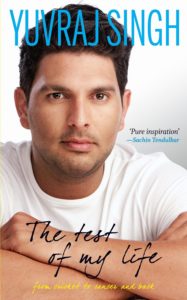 What comes to your mind first, the moment you hear the name ‘Yuvraj Singh’? ‘6 6s’ or ‘Man of the Series in the 2011 world cup’ or ‘an arrogant cricketer’ or ‘a flirt’ or ‘a bar brawler’? If I give an introduction of Yuvraj Singh in this review, it would be an insult to the Man because he needs no introduction; some of you hate him, most of you love him but you definitely know all there is to know about him. Or so you think. Being a big fan of Yuvi, I too was under the same impression until I read his book ‘The Test of my Life’.

The book is about the biggest challenge Yuvraj Singh has faced in his life. No, not Australia. It’s cancer. Germ cell cancer – seminoma, to be more specific. When I first received the book from Random House, I thought that this would be a boring read. Reading 200 pages about a man’s fight with cancer is surely going to be boring; be it Armstrong’s or Yuvi’s. The editor, too, must have thought about it and has smartly divided the book into three parts – Before Cancer, During Cancer and After Cancer. So, this book never gets boring.

The language used in the book is simple & easy making it a single sitting read. The 200 pages can be completed in no time. The binding, the cover, the paper quality and the font used are all very elegant. In conclusion, I would only say, buy/borrow/steal a copy today and read it to know the true life of the Man.