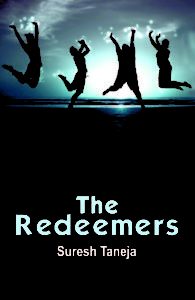 Suresh Taneja’s The Redeemers shows you an ideal India of 2030. It gives you hope and the power to dream; it is inspiring, but at the end, it gives an idealist way and not a perfect way to fight corruption. The book was written a few years back and it has been re-launched in 2013, after making certain changes. The sole motive of this book, as is claimed in the author’s note, is to make it popular and reachable to young adults of all ages so that they can read the story of G4 (the gang of protagonists) and seek inspiration from them to root out the evil of corruption from this country.

The Redeemers has a very nice and well-crafted plot and I liked the way in which the story is narrated by the G4 to their children while enjoying together at a family reunion. In some way, you can liken it to how the story in Imraan Khan’s movie, Jaane Tu Ya Jaane Na, was narrated by the actors to their friends while waiting at the airport. The way India is presented – all shiny and all-powerful in 2030 – inspires confidence and makes the patriot in you feel proud and delighted. Ohh..!! If only I can see my beloved country in that position one day. It would be the best day of my life. Well, enough with my feelings. Let us get down to business. To be honest, I liked the main characters – Vikram, Yuvika, Manisha and Akshay very much; they are the perfect embodiment of today’s young India.

The story of The Redeemers is about a gang of 4 – Manisha, Yuvika, Vikram and Akshay – who are the best of friends and are the children of 3 best friends Raj, Rahul and Vineet. The children, along with their parents, join each other every year at an annual reunion wherein they catch up with their buddies and enjoy each other’s company to their heart’s content. It is at one such union, in the year of 2009, that the G4 come face to face with the rampant corruption prevalent in our society and decide to gear up and do something about it. What follows is a massive anti-corruption campaign which is well-planned and well executed, with the prime focus on school and college going students. I really appreciate the way in which certain ideas pertaining to the eradication of corruption were suggested to the readers. In my opinion, a few ideas are very workable if implemented well. The book is an inspiring read, at least in the sense that it urges you to stand up and do something about the grave corruption situation today rather than being just a meek spectator.

A few things, however, could have been better. For instance, the story gets a little boring when the same message is repeated over and over again in various speeches, sessions, interviews, discussions etc. This, I believe, could have been avoided to a great extent. Also, the situations could have been made more interesting. The Redeemers has a very powerful theme. But unfortunately, the way it is written does not make it very interesting. Also, a few ideas, I believe, were taken from other movements (like the yellow live strong bands). In the end, I would recommend this book to the readers and hope they will seek and find inspiration in the story of the G4. I also wish the author all the very best in his future endeavours.