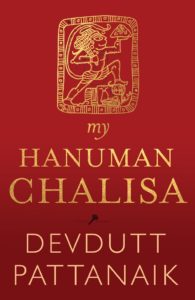 Who sees it all?

Varuna has but a thousand eyes

Composed over 400 years ago by Tulsidas in Awadhi, Hanuman Chalisa quickly gained tremendous popularity. It was a hymn of the masses and its appeal transcended barriers of age, caste, power, money, and geography. The fact that it is still relevant and highly popular speaks a lot for the simple yet powerful hymn. my Hanuman Chalisa by Devdutt Pattanaik is a book which brings the Hanuman Chalisa closer to today’s generation by making the readers understand its simple nuances and the profound meanings behind its words.

At the start of the book, Devdutt writes a note on why this book is titled my Hanuman Chalisa. The reason is simply that this book is the result of Devdutt’s exploration of the divine hymn with an aim of not to convince but to enrich. The book, instead of chapters, is divided into Dohas and Chaupais of the Hymn with each section exploring the text under consideration.

The beauty of the book lies in the fact that in a simple and adequate language it makes the reader understand the meaning of each word. But that’s not all, my Hanuman Chalisa cannot be called a mere translation. There is a lot of interpretation and bridging in the gaps where facts move to the background and analysis takes the centre stage. In addition to that Devdutt has included a lot of other information about our beloved God which has been taken from various other sources.

He has tried to incorporate the ancient wisdom of our Vedas, the Puranas, and other texts and explained their importance in the context of the text under study. The result of this is that the reader not only emerges with an increased knowledge of Hanuman Chalisa but also with an overall increased awareness of our ancient Hindu wisdom and worldview.

The author has painstakingly included and explained the variations of god Hanuman in other cultures and other texts. For example, he mentions the subtle differences between Valmiki’s Ramayana and Tulsidas’s Ram Charit Manas. Then there are also other variations of Ramayana like the Assamese Ramayana. Not only that, he has also mentioned the variations of Hanuman in other cultures like the Thai, Malaysian and Chinese. Hence it is quite clear that the book is a work of extensive and meticulous research.

Overall, the book proved to be a delightful read; one which will definitely bring the reader close to understanding God and the Hindu worldview. I end this book by recommending it to all lovers of Hanumanji and to all who have faith in him and Hindu religion.