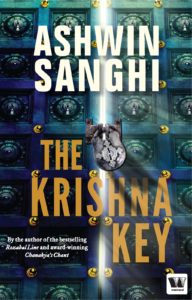 “Five thousand years ago, there came to earth a magical being called Krishna, who brought about innumerable miracles for the good of mankind. Humanity despaired of its fate if the Blue God were to die but was reassured that he would return in a fresh avatar when needed in the eventual Dark Age—the Kaliyug. In modern times, a poor little rich boy grows up believing that he is that final avatar. Only, he is a serial killer.”

Ever since Dan Brown published his Da Vinci Code, there have been a lot of books in the same genre. But Indian authors failed to latch on to the trend, at least for quite some time. Then along came Ashwin Sanghi with his “The Krishna Key” and truth be told, it’s worth a read. Having read and enjoyed “Chanakya’s Chant”, I had good expectations from the author.

The plot, in itself, is not very complicated. The protagonist Saini is accused of murdering his close friend and stealing a sacred seal that is supposed to unlock the secrets of Dwaraka, Krishna’s island capital in Gujarat. He, with the help of his student, escapes the police and goes about the process of trying to solve the mystery surrounding the seal and the death of his friend. As he goes about finding various clues, Saini encounters a lot of twists and turns that he is ill-equipped to prepare for. However, with some help, he manages to deal with everything and arrive at the truth.

While reading The Krishna Key, all I could think of was how it was just an Indian version of the Da Vinci code. However, what this book lacked was the same urgency that was present in the Da Vinci Code. While Robert Langdon always behaved like someone with a sword on his head, Professor Saini seemed to be a lot more unconcerned about the impending doom. Inspector Radhika Singh was probably the most powerful character, but even here the author tried a little too hard in not trying to stereotype. The villains, whom I shall not reveal, also have very loose backgrounds and are not convincing enough to want them to fail.

On the plus side, it is a ‘Mythological Gold Mine’ for people who are interested in that sort of thing. I enjoyed reading all about Lord Krishna, as I did not know much apart from the Mahabharata and the battle of Kurukshetra. It was an interesting read, especially when the author tries to trace the movements of Krishna and his followers. While it does not have the same controversial impact as that of the Da Vinci Code, you would surely not want to miss out on catching up on your mythology.

If you are not expecting a mind-blowing, fast thriller and want a light read, then this is the book for you. While “The Krishna Key” may not be high on the list of “must read”, it is definitely worth reading once and you will definitely not regret it.