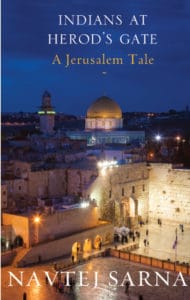 Indians at Herod’s Gate: A Jerusalem Tale is the chef-d’oeuvre work from the Indian author-columnist Navtej Sarna who currently also holds the esteemed office of the Indian ambassador to Israel. Sarna in this non-fiction book writes about the Indian Hospice located in the ancient city of Old Jerusalem which was born as a result of the efforts of Baba Farid, a great Sufi saint of his time, who eight hundred years ago went to Jerusalem and established the Indian Hospice, the place which has been welcoming Indian pilgrims to the holy city ever since.

The hospice in its current state is run by the descendants of Sheikh Nazir Ansari, a nobleman who was urged to leave his native village of Saharanpur in Uttar Pradesh, India to go and take over the charge of the then dilapidated structure which once had seen the most glorious days in the history of Israel. Even to this day, the family seamlessly runs the hospice and makes it available to every Indian pilgrim who visits the holy city.

Indians At Herod’s Gate very beautifully delves into the history of the Hospice, going as back as eight hundred years into the era and times of Baba Farid who lived and preached in the same time as the highly revered Sheikh Nizammuddin Auliya of Delhi and Sheikh Moinuddin Chishti of Ajmer. The book also traces its recent history which includes mainly the times around the World War 1 & 2 and post the 6 day war in 1967.  The writing style of the author is informal and yet informative. Time to time, he talks about the Ansari family and its members, describing their food, culture and hospitality.

His thorough research enables him to quote extensively from various sources like the works of the famous poet, composer and chronicler Wasif Jawhariyyeh and the travelogue of the much known Ottoman Turk traveler Evliya Celebi. He also cites various other books and newspapers like The Palestine Post. Apart from the Indian Hospice, for the benefit of readers (like me) who are not much aware of Jerusalem and its rich history, the author also chronicles the history of the old city in an informal and interesting way.

Indians At Herod’s Gate is very good for people curious in history and the way the author writes makes it much easier for readers to engross themselves in this noteworthy book. I look forward to more such works from the author and recommend this book to all history lovers.