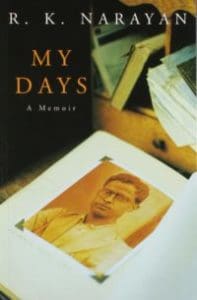 Who doesn’t know Malgudi, the small, sleepy and fictional town in South India which has long made its imprint on every Indian heart? Thanks to the widely popular Indian television series by the same name, Malgudi is one of the most recognized fictional elements in Indian writing. The town with its many occupants has given us innumerable stories to delve on. But, Rasipuram Krishnaswami Iyer Narayanaswami more popularly known as R.K. Narayan, the creative genius who gave us Malgudi Days, is not just known for Malgudi Days but also for countless other beautiful books such as Bachelor of Arts, Swami and Friends, Guide, The Man-Eater of Malgudi, The Dark Room, The English Teacher, Waiting for the Mahatma, A Tiger for Malgudi and The World of Nagaraj among others.

My Days: A Memoir is the master storyteller’s memoir describing the intricacies of his life with fervour and with the best of his witticism and candidness. Narayan beautifully outlines his childhood life at Madras, his initial college years at Mysore, a brief stint as a college teacher and in vivid details describes his journey as an author. Narayan as a child used to live with his grandmother and maternal uncle at their house in Madras. This was an arrangement which had been in place since his toddler days and continued right until the end of his school years. His father, mother along with his other siblings used to live in a sleepy town in Karnataka (before finally moving to Mysore), where his father served as the school headmaster. Later during the war years, when Madras, being nearer to the warships which dotted the Indian coast, was declared unsafe and when his father too became highly critical of the level of his education in Madras, Narayan was promptly called to Mysore.

Having found Mysore much more charming and beautiful than the erstwhile abode of Madras, Narayan soon settled into his new life with new friends and family. He studied till the bachelor’s degree and later gave up on the masters after having received a quite demotivating lecture by his friend (whom he later became quite thankful of). Tired of an idle son sitting at home, his father had sent him off to work as a school teacher in a nearby town. A few days into his new occupation, he found his incompetency in teaching unbearable. Finally, after much thought and deliberation, he decided to quit and pursue his passion for writing. As a newbie writer too, he did not fare well and often found himself struggling with publishers. But as fate would have it, he found his much deserved recognition and acclaim.

What I especially liked about the book was its ingenuousness and wittiness. The articulate narration of youthful nostalgia was indeed a pleasure to the reader, and the references and anecdotes surrounding family members and acquaintances were interesting. The book, in all its wholesomeness, has a theatrical old world charm, which is hard to resist and which brings the reader back to the black and white times of watching Malgudi Days on Doordarshan television channel. There are few authors who will forever be etched in my memories, and heart and needless to say R.K. Narayan is one of them. Thus, this book is worth reading for anyone who is interested in Indian literature.

So how did you like this review? Do let me know by dropping a line below.