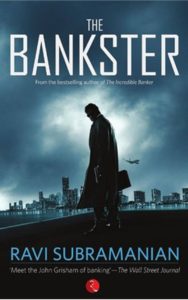 I can proudly say that I am one of the biggest John Grisham fans there is. I have read all his legal thrillers and loved every one of them. So, when Wall Street Journal praised Ravi Subramanian as the “John Grisham of banking”, I was a bit apprehensive because I’ve been fooled before too by Mark Giminez of “The Common Lawyer” and Michael Connelly of “The Lincoln Lawyer”. Anyhow, I decided to read Ravi’s latest book, The Bankster. I’ll say only 2 words – “Nowhere close”.

The plot of The Bankster is taken from the real-life crisis of the Koodankulam nuclear plant protests in Tamil Nadu. The basic premise of the story is regarding the use of foreign-funded black money by Indian NGOs to protest against the setting up of a nuclear power plant. The story is divided into three sub-plots – the role of foreign agents in pumping hawala money into India, role of Indian banks in legalizing this money and the role of NGOs as beneficiaries of this illegal money. Though there is nothing creative behind this plot, the author has done a great job of weaving these three sub-plots together.

In the first subplot, the author takes us to Angola to show how blood diamonds are being used by the CIA to fund this mission. In the third subplot, the NGOs are shown to be blackmailing the government for their own personal purposes. The major part of this book is about the second subplot – the role of the banking industry. While reading this part, I couldn’t ignore how similar it was to Upendra Namburi’s “31: A Thriller”. The modus operandi of the scammers is to create a fictitious account in the name of a fictitious firm, bring in foreign money into this account and then use this money to fund the NGO protests.

In this, they are being helped by a group of bank employees, from top management to the RMs. When three of the bank employees die in accidents under mysterious circumstances, an ex-employee, Karan, who is now an investigative journalist, smells something fishy and starts investigating. The rest of the plot is about Karan’s investigation, with help from a few employees and how he unearths the entire plot of the people involved and brings them to justice.

The Bankster starts with a very interesting scene in an Angola military camp. The next chapter, based in Kerala, too is very intriguing. But that is where the fun ends. Once the plot enters GB2, the bank, the entire excitement in the story evaporates. All the narrations and sub-plots are about petty office politics and nowhere a thriller. All this gets boring after a while and I lost total interest in reading further. Later, when Karan enters the plot and starts his investigation, the plot becomes interesting again but the narration’s frustrating because of the forced suspense, which was quite unnecessary. Very simple clues are explained in great lengths which destroys the whole fun of the mystery. The only satisfaction in reading The Bankster was the 2-3 mysteries which are revealed at the very end. I cannot recommend this book to the readers because of the uncreative plot, sub-standard dialogues and uninteresting characters.