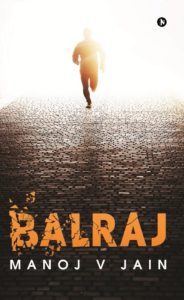 The world of the corporate is cruel and demanding. It takes a toll on your mind, body, and soul. It makes you do difficult trade-offs between family and work. It is highly likely then that some people experience a tipping point; a point where they no more want to run the rat race; a point when they want to leave everything behind and just escape.

I have not found what I am seeking, he thought, but I will get there.

Balraj is the story of one such man. Inder is a 47-year-old successful corporate honcho who has everything in life and yet he isn’t happy. He wants to run away; he wants to escape all ties and go on a journey to discover himself. So, one fine day, he does just that. He leaves everything behind and embarks on a self-discovery mission severing all his professional and familial ties. He assumes a new identity – Balraj and takes a one-way train ticket to Jaipur. What happens next is for you to know when you read the book.

Balraj is a book with a simple yet interesting plot. I think it was the premise that drew me to the plot and got me hooked on Inder’s story. There are no side plots just the main one which tells us the story of Inder. The characters of the book are a decent bunch. Balraj stands out amongst them all. I liked how the character blends in effortlessly wherever he goes. Inder’s metamorphosis into Balraj is beautiful and so is his self-discovery mission. The other characters, however, are lacklustre and fail to impress.

I wasn’t much impressed with the writing style either. I cannot pinpoint what exactly is wrong with it but it seems to be lacking in something. It’s not bad but it’s not great either; it seems to lie somewhere between these two extremes. The storytelling requires a bit more polishing as I recall many instances where the narration seemed a bit off and not in sync with the flow of the story. Though the book is written in third person voice, it still felt like the words were flowing from the author’s context rather than Balraj’s. The essence of the author overpowered the essence of Balraj in the narration.

I was pleasantly surprised by the climax. I was totally expecting a different outcome but how the book ended was satisfactory as well as unpredictable. It was perfectly in sync with Balraj’s personality and the reader’s feelings. It was indeed a job done well. There are a couple of editing mistakes in the book but the language, in general, is flowy and breezy.

I liked the way the book seems to make a connection between the material and the immaterial, the spiritual and the self, the subliminal and the not so subliminal. Balraj’s spiritual journey is refreshing and there is a lot that can be learned from his story.

Overall the book presents an interesting read. It is a short and breezy read and will appeal to many people who are able to identify even a fragment of their own self in Balraj. I personally enjoyed it and would recommend it to people who are looking for a short and easy read with a decent plot and characters or to those people who often wonder what it will be like to escape.

Buy your copy at the link below.