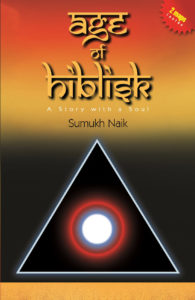 Fantasy is probably the most arduous of all the genres for an author to write because he/she does not have the luxury of using an already existing place/location. The entire world, entire geography, entire landscapes have to be built from scratch, and in a way that is easy for the readers to see and visualise. Names of places and characters have to be thought of, and they have to be exotic like Dumbledore or Narnia or Hogwarts, to catch the attention of the reader. New spells and magic potions have to be brewed. And, the strengths and weaknesses of each character have to be developed in-line with the plot. Tolkien, Rowling or Lewis make fantasy look effortless but these things are easier said than done.

Age of Hiblisk is a new fantasy novel written by Sumukh Naik. It is about the fight of a young prince and princess in order to protect humanity from a power hungry monster.

When the habitants of Zyren Village see strange events in the Himra forest, they go to Prince William of Jaguar for help. During his mission to protect his people, he is captured by the rival kingdom of Ivory and is rescued by Sage, the 11thmaster who is the protector of their world, Pantolis. The Sage explains to William that Pantolis is under threat from Dushtt, the prince of Underworld, and it is only he, along with Princess Sara of Ivory, who can protect the world from certain doom. To fight Dushtt, the prince and the princess have to undergo rigorous training, and for that, they have to travel through the lands of Hiblisk, a world of legends and magic. Can Sara and William survive in the magical lands of Hiblisk? Can mere mortals defeat the most powerful Dushtt? Will Pantolis survive this doomsday?

The initial chapters of Age of Hiblisk, where the mystery is slowly built upon, are brilliant. Sumukh Naik has done a good job with the geography of Pantolis and Hiblisk. The kingdoms, the forests, forts, rivers and plains have been nicely dealt with. The character build-up is great; the way in which the young William and Sara slowly mature with each step of the training is nicely narrated. The element of magic, the soul of any fantasy novel, is pretty decent; the 11 masters, the Okares of the underworld, the mythical creatures of Hiblisk, etc. are well thought of.

There are few negatives in Age of Hiblisk which could have been avoided. The numerous editing mistakes and the use of vernacular English are huge turn-offs. Another thing which doesn’t quite add up is that some characters have western names and some have Indian; a blunder in my view, like eating pizza with dum aloo.

Sumukh Naik seems to be a promising author with a powerful imagination. More emphasis on the editing and the cover design would surely have lifted Age of Hiblisk into the best-selling lists. Nonetheless, it is a recommended read.